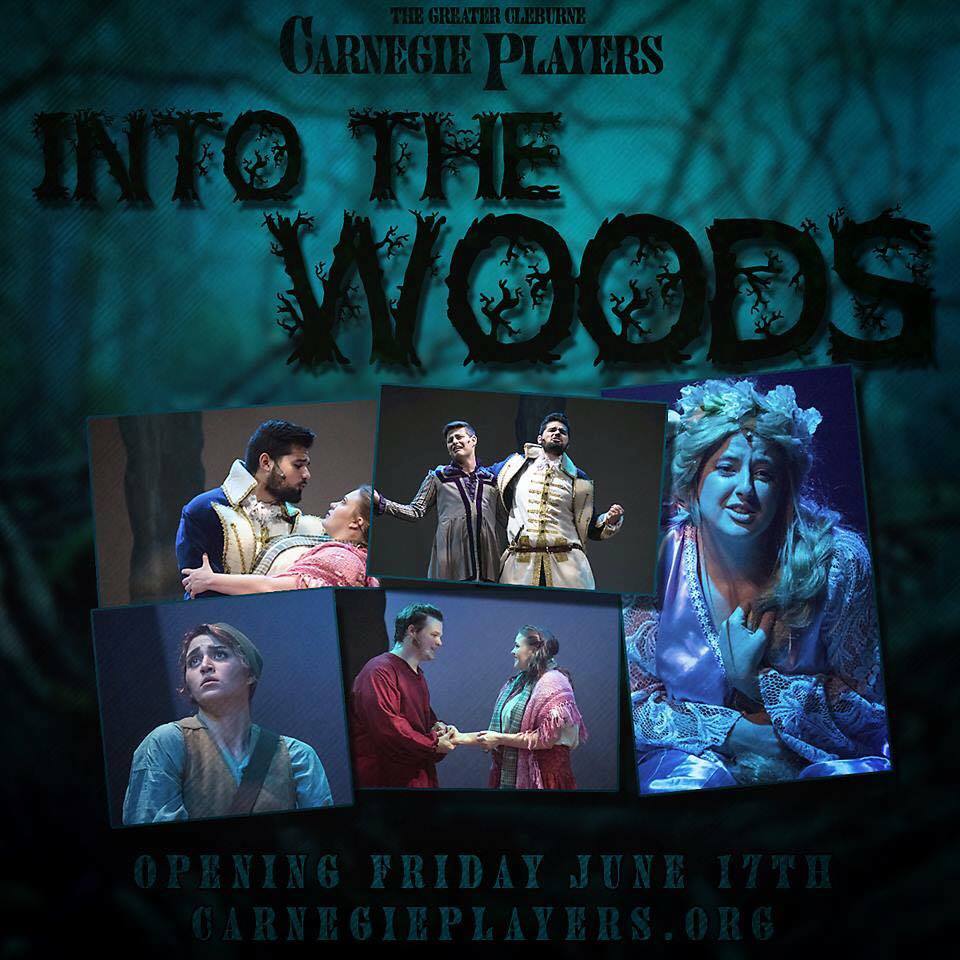 “Careful the wish you make, / Wishes are children. Careful the path they take- / Wishes come true, / Not free.” Stephen Sondheim

“Everybody gets a chance to shine in Into the Woods,” says Stephen Sondheim in a Masterworks Broadway interview, “that’s what makes it perfect for community theater and schools.” Indeed, this musical has become perhaps the most popular of Sondheim’s works not only for its twists on familiar fairy tales, but also because each beloved character DOES get a chance to shine. This is definitely the case in GCCP’s production.

Into the Woods debuted in San Diego at the Old globe Theatre in 1986 and premiered on Broadway on November 5,1987, wining several Tony Awards, including Best Score, Best Book, and best Actress in a Musical (Joanna Gleason as The Baker’s Wife), in the same year as Phantom of the Opera. Often produced, including a 1988 US national tour, a 1990 West End production, a 1997 tenth anniversary concert, a 2002 Broadway revival, a 2010 London revival, in 2012 as part of New York City’s outdoor Shakespeare in the Park series, the popular and much-loved musical was released as a movie in 2014.

As every theater lover surely knows by now, the musical pulls together the plots of several Grimm fairy tales that explore the consequences of the various characters’ wishes and quests. Tied together by an original story involving a childless baker and his wife and their desire to begin a family, all the characters eventually interact, including the witch who placed a curse on the couple.

From the entrance music (light instrumental pieces that have increasing energy as curtain time nears) to the brilliantly written and performed opening speech (both the writing and performance courtesy of Courtney Mitchell, who also plays the Narrator), the audience is drawn into this world of fairy tales. The scenic design collaboration by Director Becki Esch and Stacey Greenawalt is deceptively simple – yet each storybook setting is unique and eye catching. The way they are transported as the scenes change also speaks to the stories they tell.

As the Narrator, Courtney Mitchell shines. Her comedic timing and narrations were very well done. One can see that she is having a good time with this role and as a part of the cast family. Sometimes this role can seem to slow down a production, but she did a good job of assisting with the pacing. There seemed to be an issue with her mic on the night this was reviewed, but she did a wonderful job increasing her projection to cover the missing mic.

Caleb Pieterse and Marcie Allison, as the Baker and Baker’s Wife, did a very good job bringing their characters to life. Their passion for the roles could be felt through their respective acting choices, as well as their vocals. It was clear that they have taken the time to build the chemistry that is required of two actors playing a married role. Both Pieterse and Allison have standout voices – their duet, “It Takes Two”, was a delight and showed the playful and fun sides, while the emotion of the final scenes was palpable.

Cinderella, played by Haley Boswell, was a wonderful character. She has a beautiful voice, and that was matched by the acting choices she made with the character. The growth we see in Cinderella from beginning to end is exquisite. The emotion she displays with the Prince in Act Two is profound. We feel the sadness – both for what is and what could have been. Her opening costume was not quite as ragged as I would have hoped to see, but that is a minor critique.

Rachel Daniels, portraying the Witch, truly tamed this daunting role. With such names as Bernadette Peters and Meryl Streep associated with this character, she had very large shoes to fill. The Witch has some of the most well known and loved musical numbers in this show, and Ms. Daniels did a superb job with them. You could feel the emotion during “Stay With Me”, it was one of my favorite songs of the evening. There seemed to be a couple of lighting hiccups with her character, at one point immediately after her transformation, there was no spot on her, so she was standing in the dark, but I am sure this will be corrected.

One of the most standout performances in this production is that of Mary Ridenour portraying Little Red Ridinghood. Again, one of the iconic roles in this production, requiring great growth throughout the show, and Ms. Ridenour went above and beyond my expectations. Her vocal ability and comedic timing were impeccable.

Jack, played by Kennedy Styron, was a wondrous character. Full of innocence and naiveté at the beginning, and then growing into a truly well rounded youth at the end. There is such an emotional connection that Ms. Styron brings to this role – with the vocal ability to match.

As Cinderella’s Prince/Wolf, Andrew Guzman is exceptional. His lecherous meeting with Little Red is memorable, both vocally and emotionally, and his arrogance as the Prince is also well played. A true highlight of the show comes in his duet with Dakota Medlin, portraying Rapunzel’s Prince. Mr. Medlin also does a great job with his princely portrayal. He is not on stage as much, but displays great acting and vocal abilities when seen.

Haley Nettleton does a good job as Rapunzel. Her facial expressions while listening to the Witch sing to her, and as she is locked in the tower are good. Some of her acting towards her demise came across a little more like a petulant child than a wronged princess, but overall it is also a strong character.

The highlight of the show for me was the duet between the Baker and the Mysterious Man in Act Two. Although perhaps one of the lesser known musical numbers, the chemistry and emotion that flowed between the two characters, Caleb Pieterse and Chris Wagner respectively, was palpable.

All of the cast this production are top rate. This is truly an ensemble cast which allows each to shine – and they rise to the occasion. There are so many elements that add up to a remarkable show – one that should not be missed! There are such lessons to be learned – life is a series of choices. Choices come with consequences – both good and bad. Underneath the laughter and music there is life. Take time to discover all these truths and you will leave the theatre with a new understanding – “No one is alone.”

Special Children’s Matinee Show – Saturday, July 3rd @ 2:30 pm. Children’s tickets $5.00 – wear fairy tale costumes – there will be a photo opportunity with the cast following the performance.
For more information and to purchase tickets go to www.carnegieplayers.org

Posted in Stage! and tagged Carnegie Players, Into the Woods
← I’ve emptied a pot of lentils into the ashes for you!Journey Over: Post-ITW →